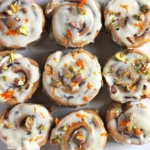 I have not tested this recipe with anything else besides whole wheat pastry flour. If you want to make these with 100% whole wheat flour or white whole wheat, you may need to reduce the flour by 1/4 cup. The dough should be soft.