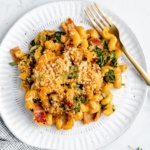 Freezer friendly option: simply make the recipe as directed, except do not bake it with the breadcrumbs on top. Instead, put it in a freezer-safe container pan like these, cover and place in a freezer safe bag until you’re ready to bake. Once ready to bake, thaw out the pumpkin pasta bake in the refrigerator overnight. Once thawed, bake as directed!