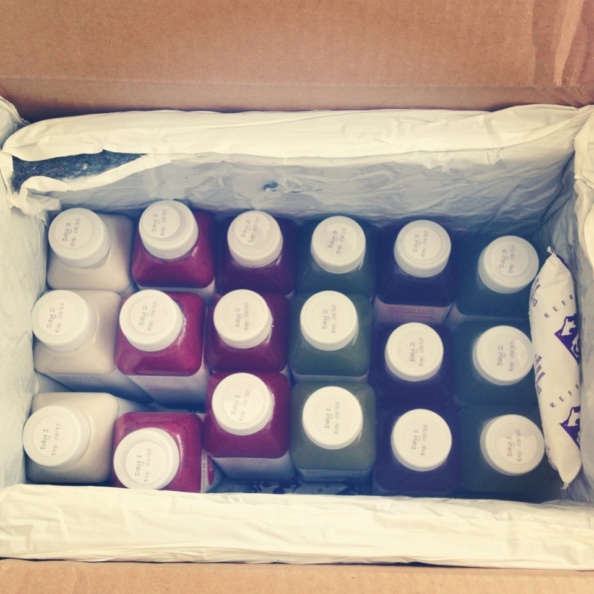 A day-by-day review of my juice cleanse: how it works, how it went, and whether or not I’d try it again. Read through and let me know what you think! 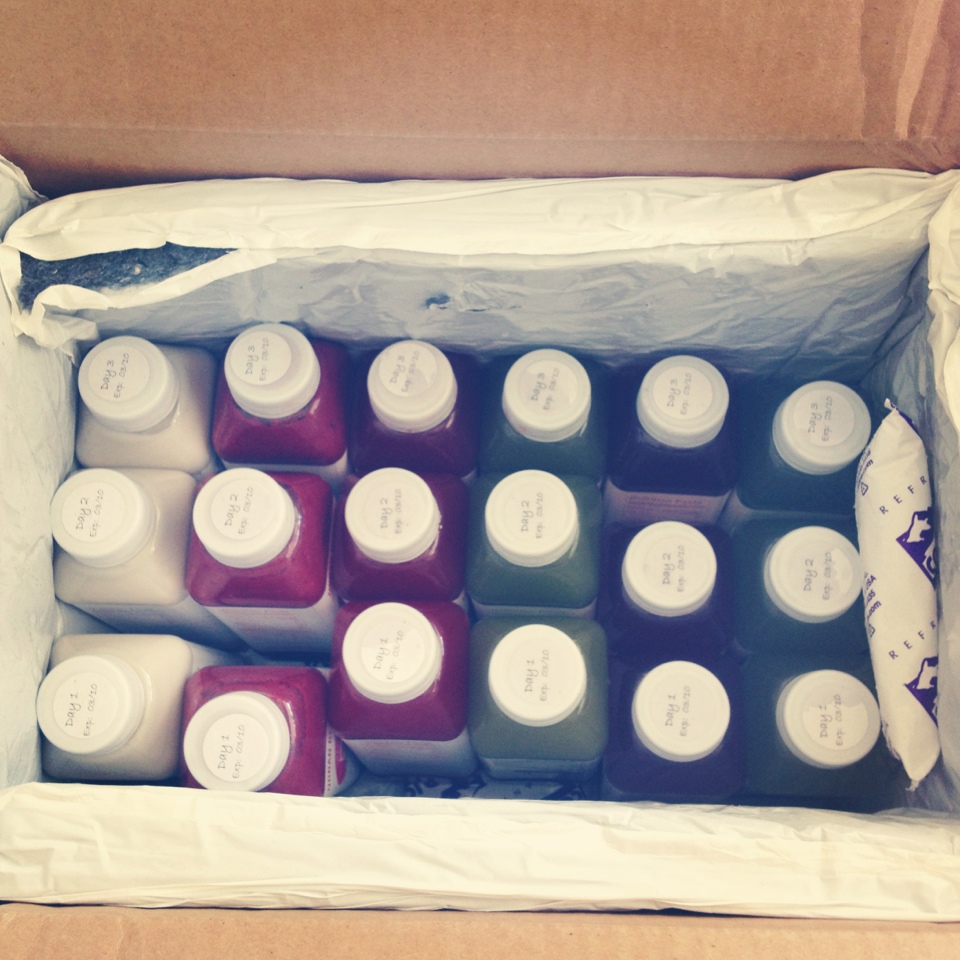 Finally my review is here! If you’ve been following me along on Facebook or Instagram, you’re probably aware that I recently did a juice cleanse. I wanted to share my experience with all of you, so here it goes:

Why I did a cleanse: I had been seeing juice cleanses all over the internet and was dying to try one. I work out nearly every day, but my eating habits certainly aren’t perfect and I had been feeling sort of off; I thought a juice cleanse might help balance my system and get back to normal. I chose Urban Remedy and did their Signature Cleanse which consists of drinking 6 organic vegan/GF juices per day.

Preparing for the cleanse: A few days before the cleanse you’re supposed to pretty much be vegan and caffeine-free. I stopped drinking coffee and ate a lot of fresh organic veggies, salads, fruit, and squash. I will admit that I had one of my blueberry muffins and eggs too. Oops! I couldn’t help it. 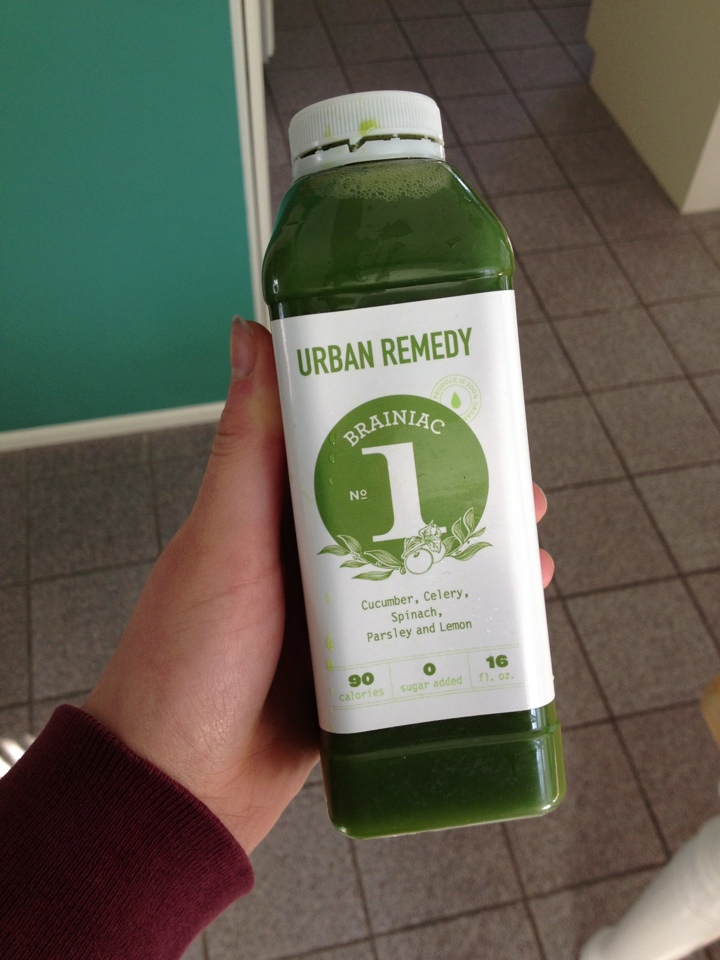 The juices arrived around 10am, but my morning was packed with meetings so I wasn’t really thinking about breakfast. I started with my first drink, and didn’t really care for it. It tasted like cucumber and parsley and I had a hard time drinking it so I ended up sipping on it all morning.

Two hours later, I still wasn’t that hungry but decided to drink Juice #2 and it was much easier to gulp down. I spent the rest of my afternoon working, and surprisingly didn’t feel hungry. I got the chills a couple of times, which I thought was weird but other than that no detox symptoms.

Later I drank Juice 3, and definitely didn’t care for it. It wasn’t pleasant tasting and I think it took me nearly an hour to gulp it down. By this time is was around 4:30pm and I wanted to work out. Again, I was not hungry… until I started working out. I did 45 minutes of circuit training and felt a couple hunger pains in my stomach. Immediately after my workout I drank Juice #4, which tasted like sweet carrot juice with a hint of ginger; it was pretty good and easy to drink! After that I made the mistake of turning on the Food Network and I got really hungry staring at the burgers being cooked on Bobby’s Throwdown. This was the point where I started craving an english muffin or an apple, but I was pretty determined not to eat so I had a glass of water. At this point I also noticed that I was pretty tired so perhaps that was a detox symptom.

Another hour later, I reached for Juice #5 and fell in LOVE; it was sweet, delicious, and full of raspberry flavor. I think it’s my favorite! I was hungry again after another hour but I waited a bit longer and drank Juice #6 around 8pm. It was creamy, sweet and smooth, and made me VERY full because of all the healthy fats from the cashews.

Wow. This isn’t that bad!

On Day #2 I woke up feeling pretty hungry and was excited to drink my juice! I knew that I was going to have to do some recipe testing, and I thought Day 2 was going to be horrible but it wasn’t at all! I spent about an hour drinking Juice #1 and working for the better part of the morning. I ventured down to the kitchen around 11am to start recipe testing, and knew it was going to be difficult to resist eating anything I was making. But I didn’t cheat! Like I said, I was excited at the idea of really cleansing my body especially since lately I’ve been feeling pretty weird.

I sipped on Juice #2 around 11:30am, and that went down within 20 minutes. About an hour later, I was hungry so I opened up Juice #3. In my opinion Juice #3 is the worst! It was extremely hard for me to drink and I couldn’t finish it all the way plus wasn’t that hungry anyway. Must have been all of the veggie juice keeping me full. I felt great!

Around 4pm I wanted to do a workout, but decided I was going to drink half of Juice #4 before I did anything crazy. I ended up doing 25 minutes of cardio/circuit training, 15 minutes of yoga, and 10 minutes of cardio again. I wasn’t hungry after, but I was extremely thirsty. After my workout I finished Juice #4 and took a shower. I had plenty of energy and felt absolutely fine. At this point, I was wishing that I could do the cleanse for a week, although I was still looking forward to a BIG salad and eggs for breakfast again.

This day I was actually excited to get to Juice #5, the raspberry chia seed shake. Mmmm my favorite! I gulped it down and got back on my computer to work for a few more hours and probably drank three more glasses of water. Around 8:30pm I got hungry again and I drank Juice #6. Again, it kept me full. Nights are always hard for me because I’m the type of person who likes to enjoy a snack before bed. Drinking lots of water seemed to help with any midnight snack cravings. 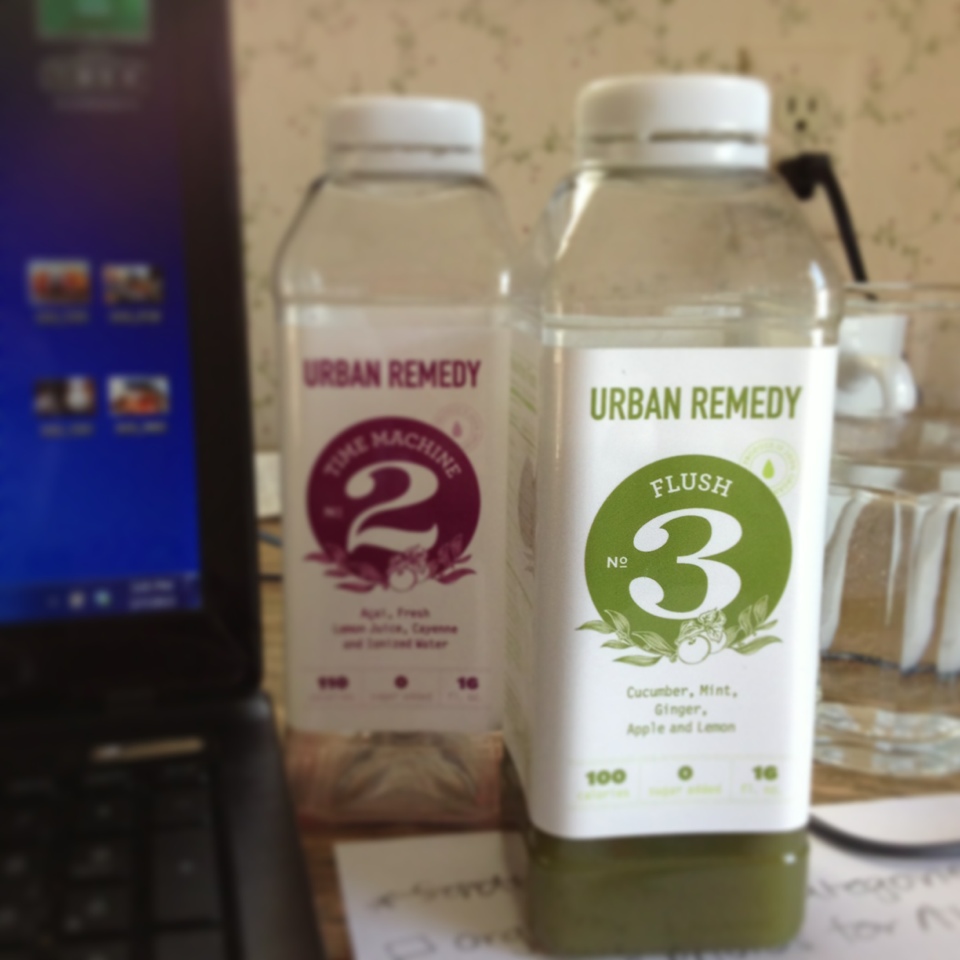 I stepped on the scale and was down 5 pounds. Whoa! And awesome!

This morning I didn’t want any of the green juice, but I plugged my nose and drank it down. I was starving ALL DAY. I’ve heard that the juice cleanse is supposed to get better, but for me it got worse. I had major cravings for a taco salad that just wouldn’t quit. Anyway I tried to forget about how hungry I was by drinking a lot of water — that helped a bit. I worked out right away in the morning and drank my juices accordingly to schedule. Basically I was just ready for the day to be over so that I could enjoy a taco salad. That night I ended up drinking two cups of herbal tea and going to bed early; I couldn’t wait to wake up the next morning and eat! I think I had a dream about mashed potatoes. 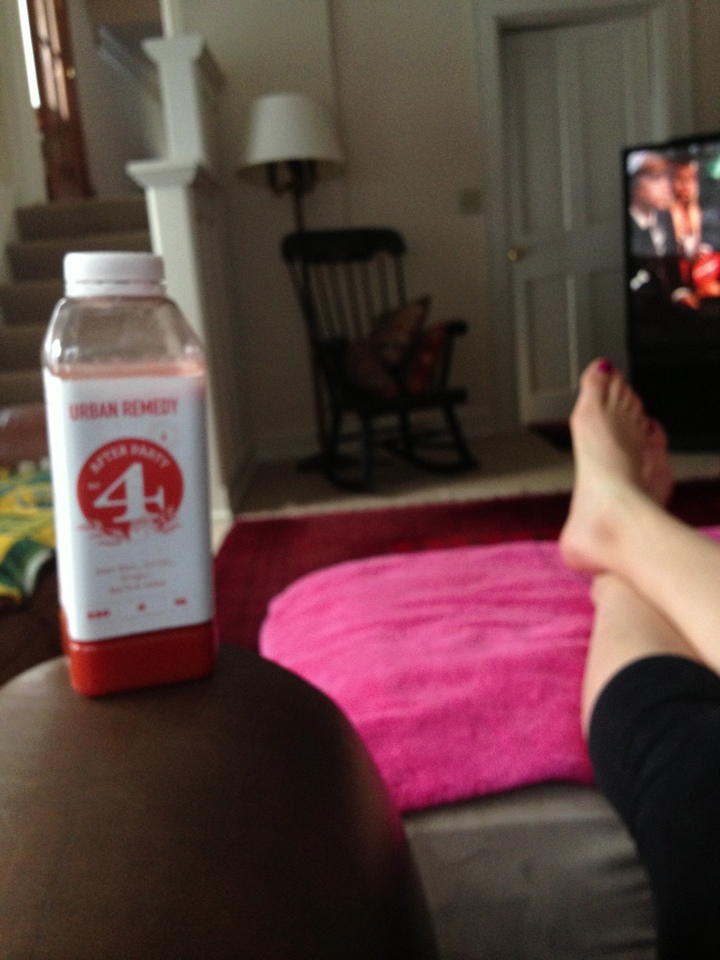 I lost 7 pounds in 3 days and feel GREAT! I had zero weird side effects and my skin is glowing.

For the next 3 days after your cleanse they explain that you should eat clean, so I tried to follow that by eating salads, fruits and veggies. I stayed away from dairy and gluten. I had a vegetarian taco salad. YUM. 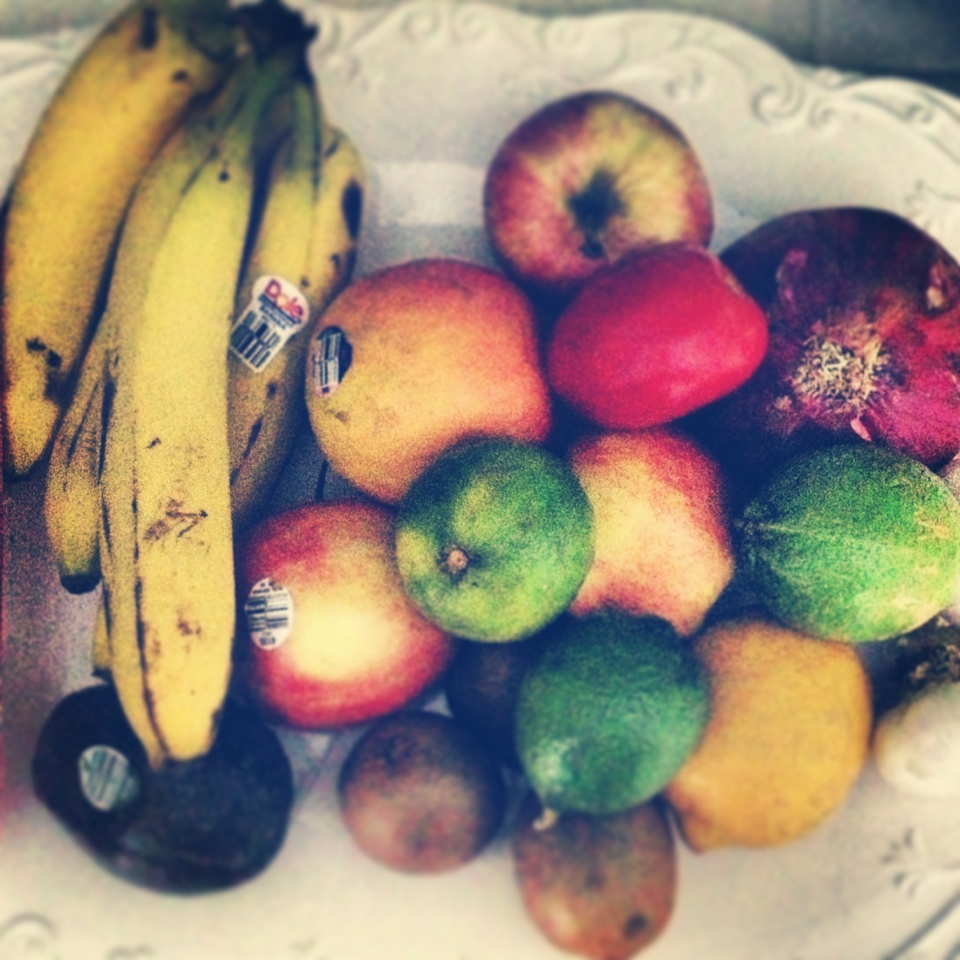 So, would I do it again?

Absolutely! Next time I’m doing the cleanse for 5 days. I think it’s a great to jump start your weight loss or to just experiment with self-control and eating. It’s crazy how much time I spend cooking, so it was nice to step away from that.  Also some of the juices are really delicious, and typically keep you pretty full. I worked out every day so I think that’s why I got extra hungry. Anyway I highly recommend it!

Head to Urban Remedy’s website to learn more about their juice cleanses and meals they offer!

Disclaimer: Urban Remedy sent me their juice cleanse to review and try for myself; however, my opinions are my always my own. 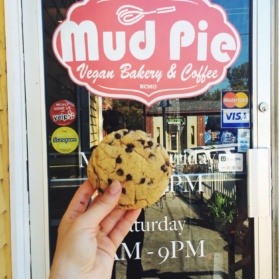 A blogging and baking trip to Kansas City! 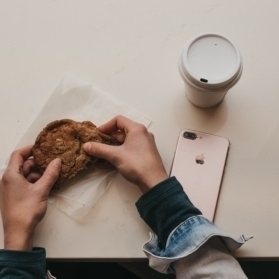 Weekend Favorites: a new playlist for you + sign up for muffin week! 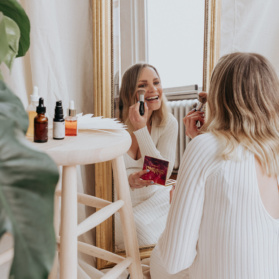 10 of My Favorite Face Oils

say it with me: cheddar. stuffed. buffalo. chicken

a stacked snack for all my #nutfree bbs: toasted q