The BEST cinnamon rolls in the WORLD. Big, fluffy, soft and absolutely delicious. You’ll never go back to any other recipe once you try this one! This cinnamon roll recipe includes options to make them overnight or ahead of time and even freeze them. 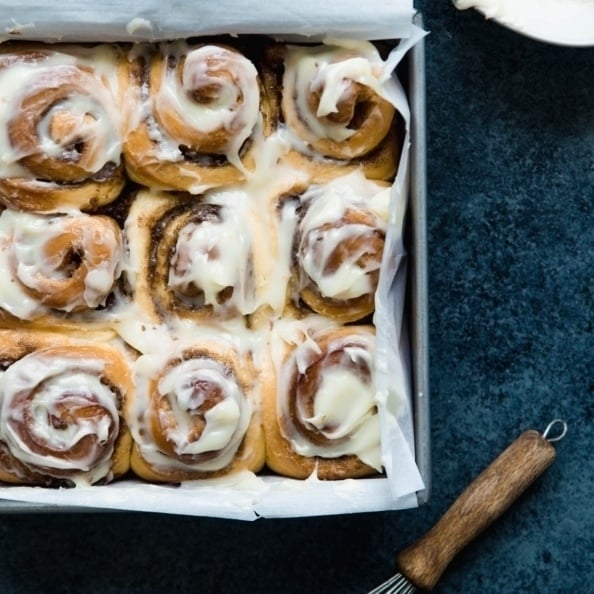 It’s that time of year again. Time to say welcome you to the wide wide world of cinnamon roll love. In case you weren’t aware, these cinnamon rolls have been the #1 recipe on Ambitious Kitchen for almost 5 years now!

Seriously, say hello to big, fluffy PERFECT cinnamon rolls packed with a cinnamon brown sugar filling and glazed with a vanilla cream cheese glaze that drips into the middle and soaks every single bite.

Healthy? Not so much. But sometimes you need something a little indulgent for moments in your life that require a little something special.

The trick to keeping the cinnamon rolls soft and fluffy is bread flour. Yep that’s right. The one and only. The rolls really won’t be the same otherwise.

Do I think they could compete with Cinnabon’s famous recipe? 100%. Be sure to read through the WHOLE post where I’ve shared tips & tricks and answered all of your cinnamon roll baking questions! 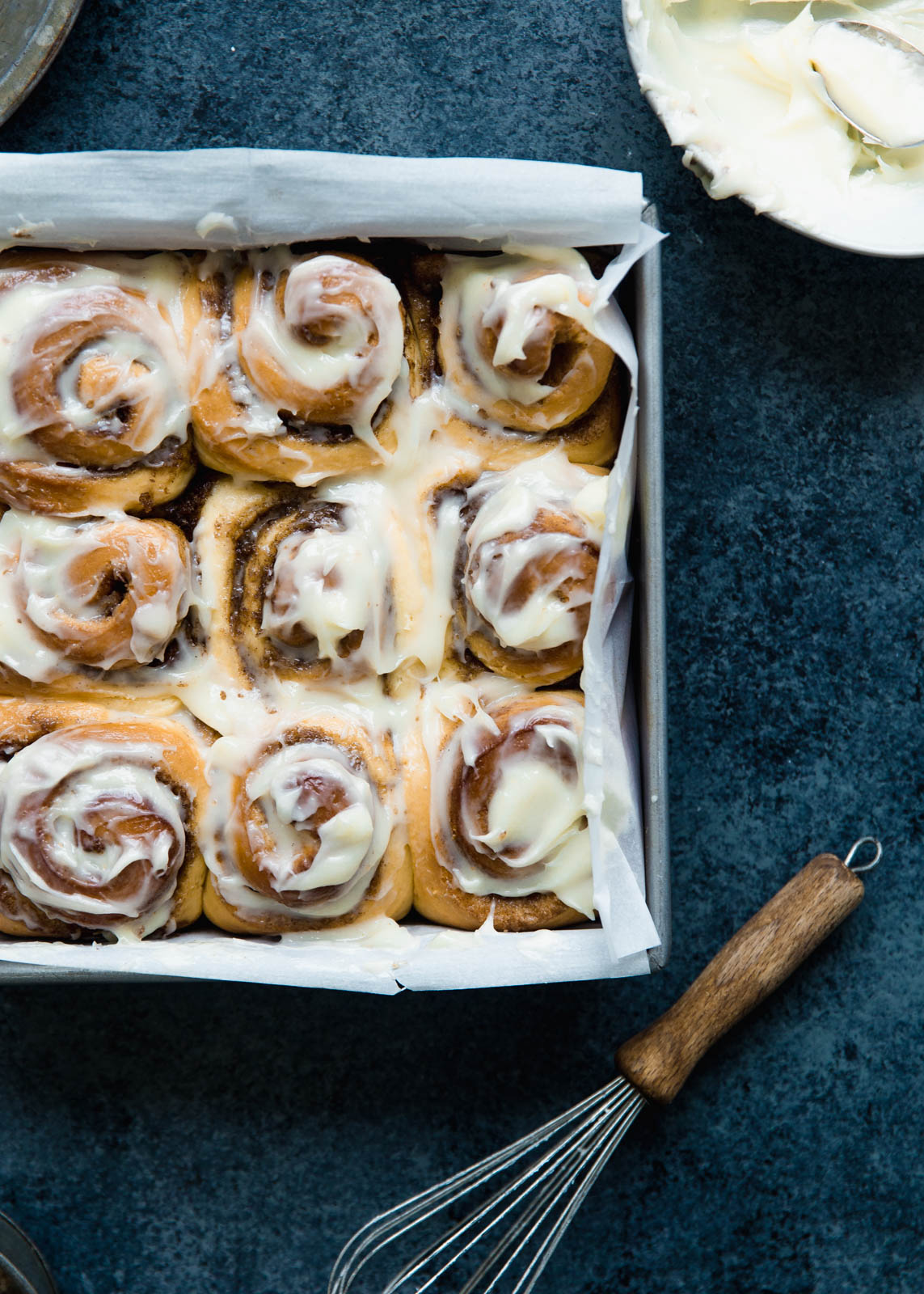 So, let me tell you more about this sweet fluffy cinnamon roll recipe because it’s one you’ll never, ever forget.

I first published this recipe back in May of 2017. I had been making this glorious cinnamon roll recipe for years and wanted to share it with all of you.

Years later, these cinnamon rolls are one of the most popular recipes on Ambitious Kitchen and today I’m bringing it back to remind you of how delicious they are, but also share a few extra tips and tricks, plus a video tutorial of me making them (at the end of the post).

The very first time I baked them up was for Easter brunch while Tony was still in baseball. His parents were in town and he lived with 5 other guys. I prepped the dough the night before, kneading it by hand and mixing the dough with an old wooden spoon. It was perfection. The next morning I popped the rolls in the oven and they rose like cinnamon roll mountains: glorious, beautiful and finished off with a sweet vanilla cream cheese icing. The most beautiful brunch pastry you’d ever see.

The guys dug in immediately and said they were some of the best cinnamon rolls they’d ever had. I knew from that point forward that I’d make this recipe at every special occasion and holiday. Now I make them every Christmas morning for brunch — it’s such a fun tradition and everyone always looks forward to my famous cinnamon rolls. 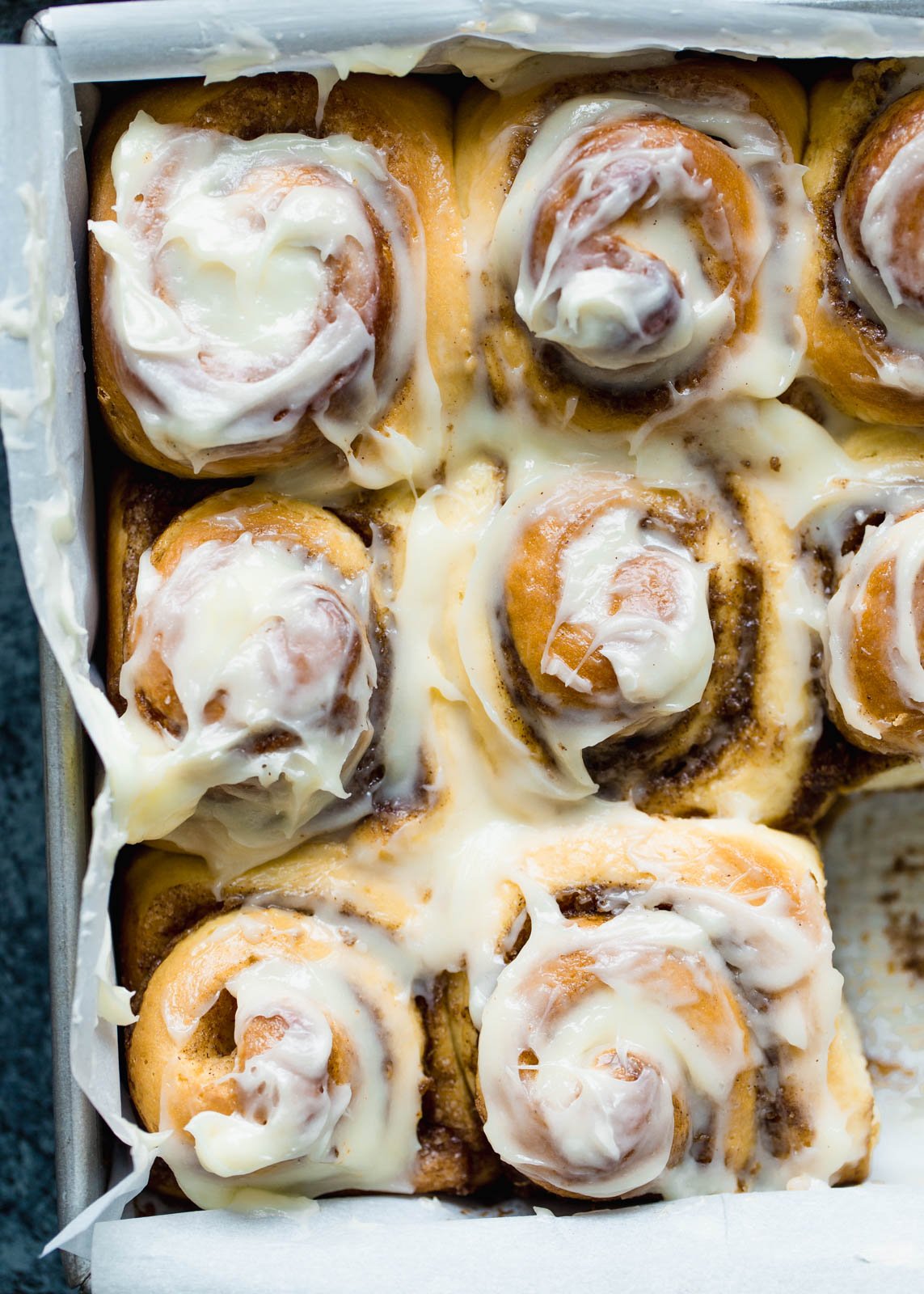 YES PLEASE. Cinnabon, you’ve got nothing on these rolls.

Can I make them dairy free?

Yes! As I mentioned, I’ve used almond milk in this cinnamon roll recipe with success. You can also use vegan butter and a vegan cream cheese to make the recipe completely dairy free. 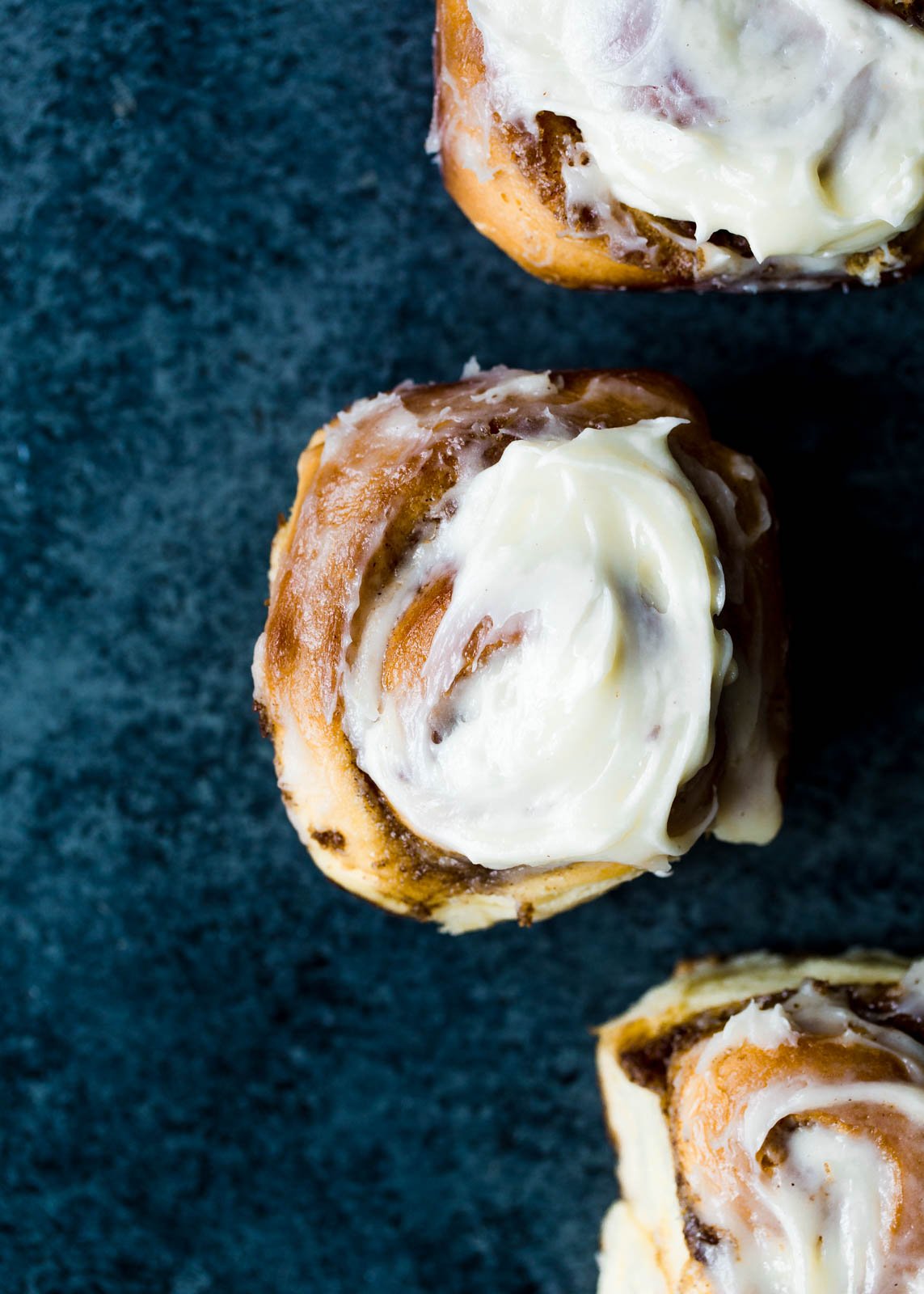 I can understand why it may be confusing to know if your yeast is activated. First, it’s important to know that there are two types of yeast to choose from:

Regardless of which yeast you’re using, it’s essential that you add it to warm milk that’s between 105 and 115 degrees F. More on this below! You can also add a little sugar with either yeast to help it get activated. 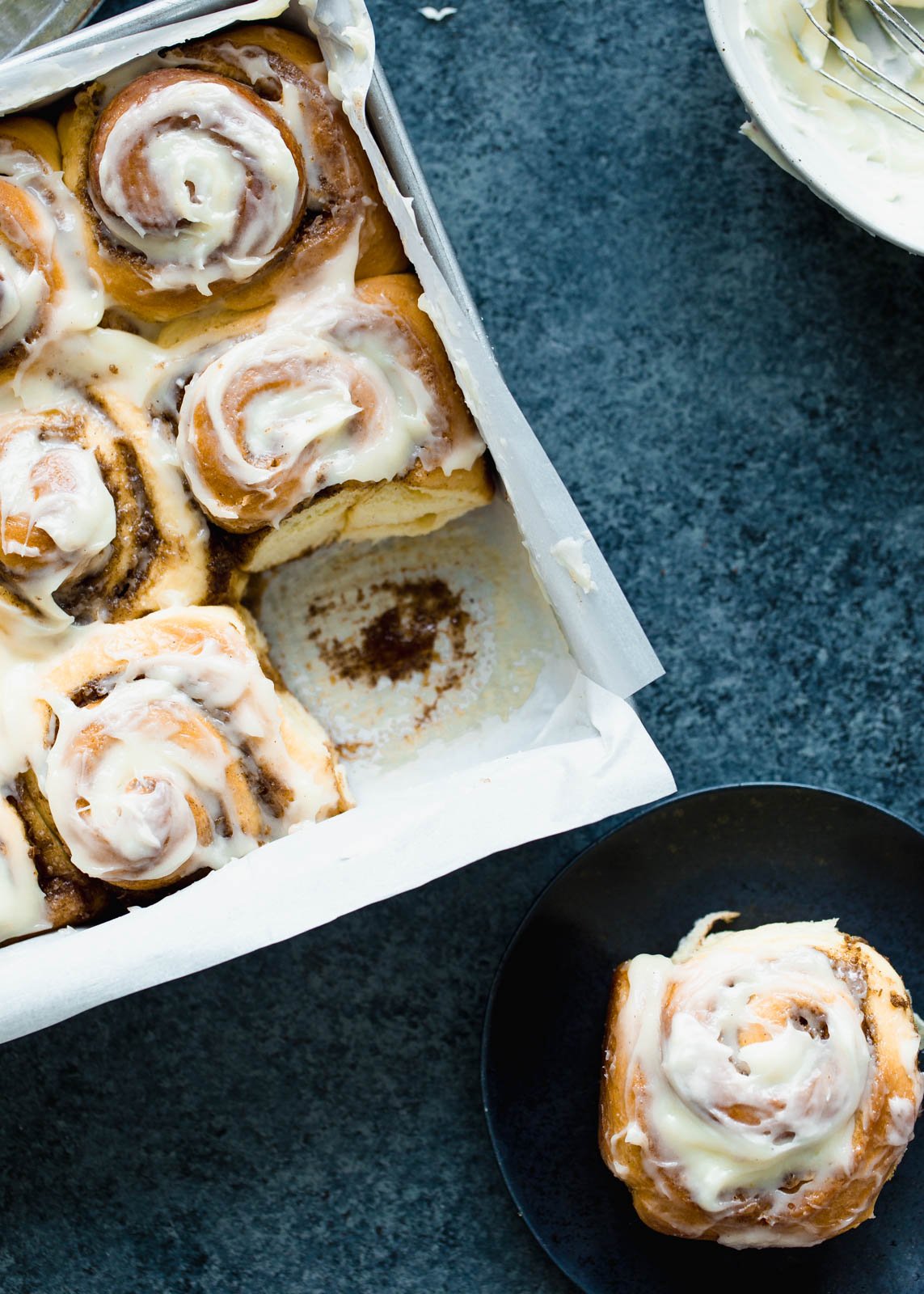 Here are some kitchen tools I recommend that will help make this cinnamon roll recipe a success: 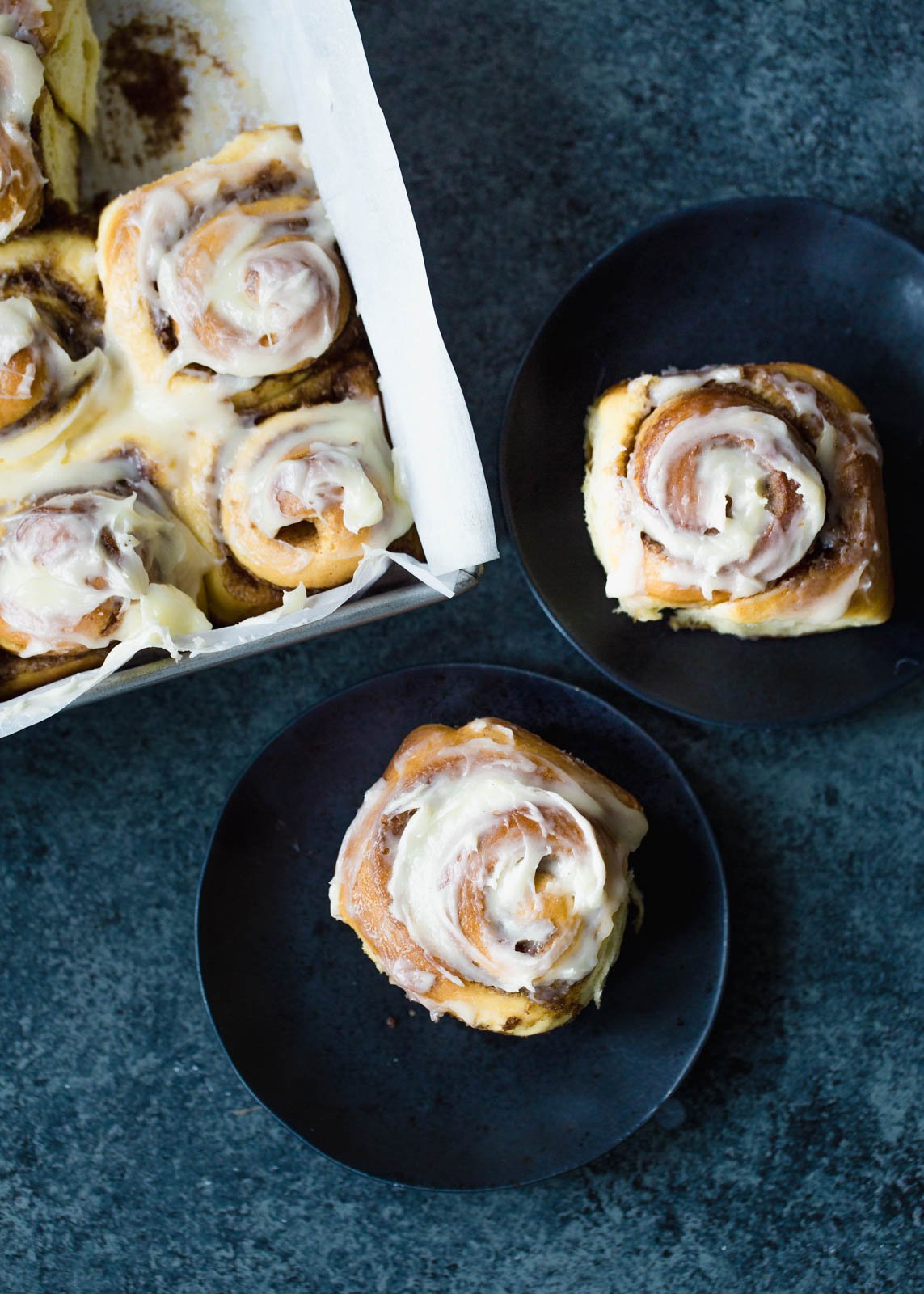 Feel free to store your freshly baked cinnamon rolls covered at room temp for 1-2 days, then transfer them to the refrigerator for up to 5 days. Simply reheat in the microwave to get them soft and gooey again!

How to make overnight cinnamon rolls 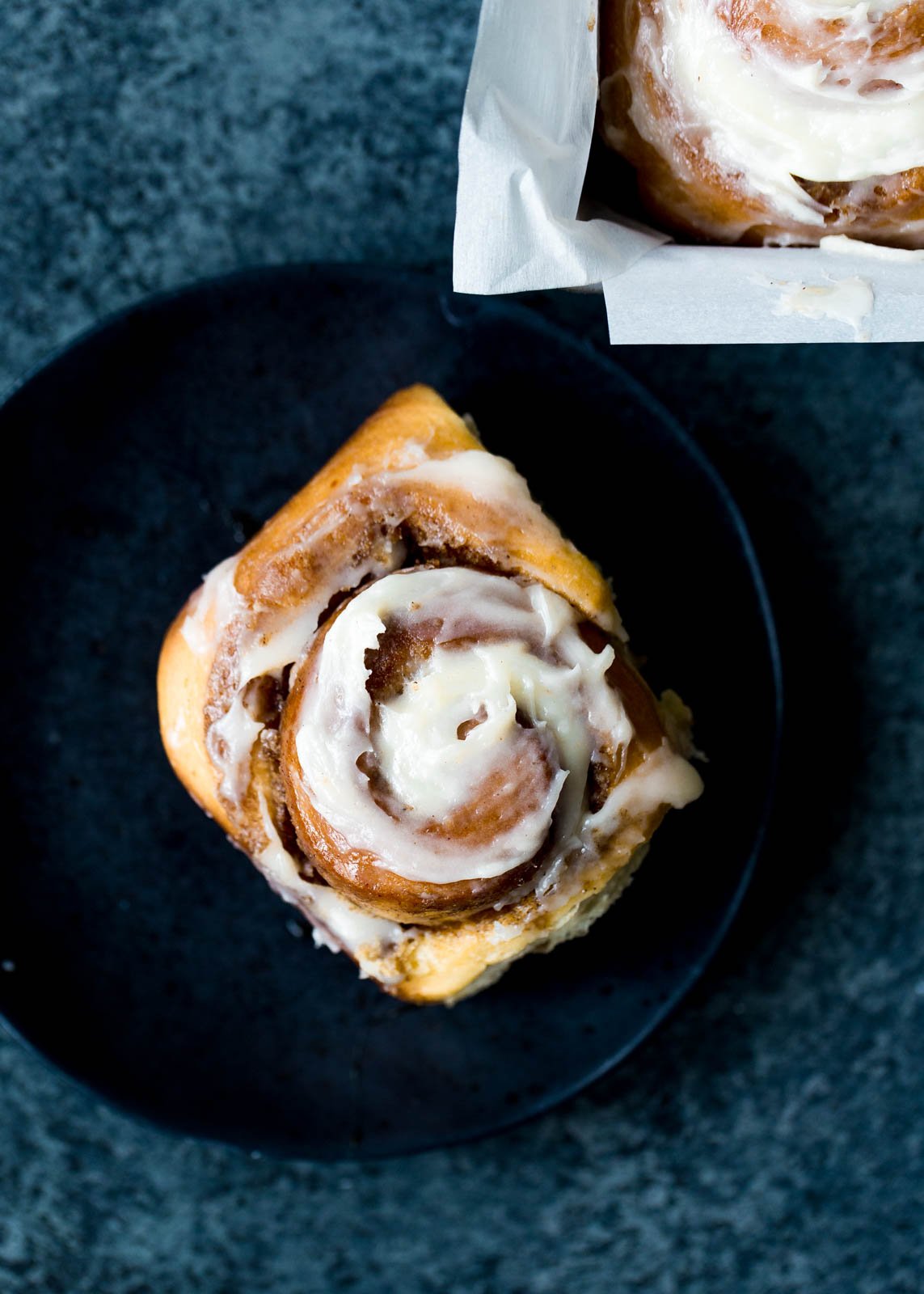 How to freeze cinnamon rolls

Get all of our delicious breakfast & brunch recipes here!

I hope you get a chance to try out this cinnamon roll recipe! They are truly a family favorite. Make them, keep them in your family for generations to come, and share a sweet surprise with someone special in your life. Don’t forget to rate the recipe below! 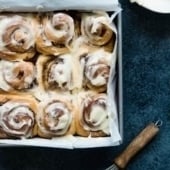 The BEST cinnamon rolls in the WORLD. Big, fluffy, soft and absolutely delicious. You'll never go back to any other recipe once you try this one! This cinnamon roll recipe includes options to make them overnight or ahead of time and even freeze them.

To make overnight cinnamon rolls:
After placing rolls into the greased pan (after the first rise), simply cover, place overnight in the fridge and then bake them in the morning as directed. I like to bring my cinnamon rolls to room temperature first by leaving them on the counter for 30-45 minutes before baking (this is known as the second rise).

Check the blog post for instructions on how to freeze cinnamon rolls, plus additional tips, tricks and FAQs!

Did you make these best ever cinnamon rolls?