Apple Cider Cornmeal Pancakes made with a touch of maple syrup and sausage. You’ll love these healthy, sweet & savory cornmeal pancakes for breakfast! 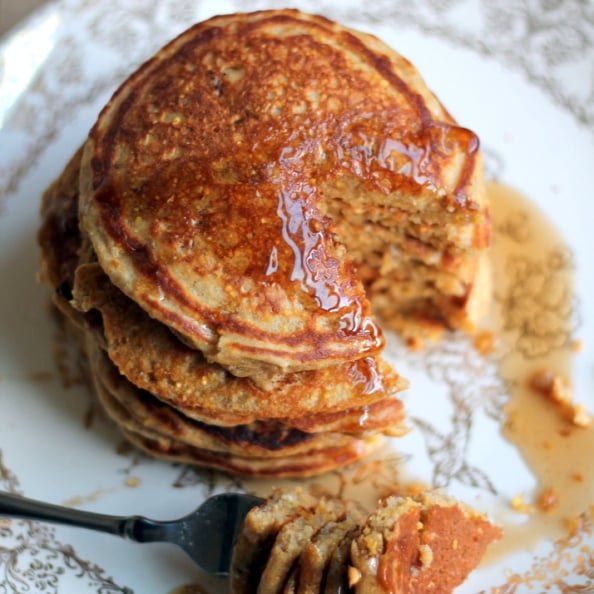 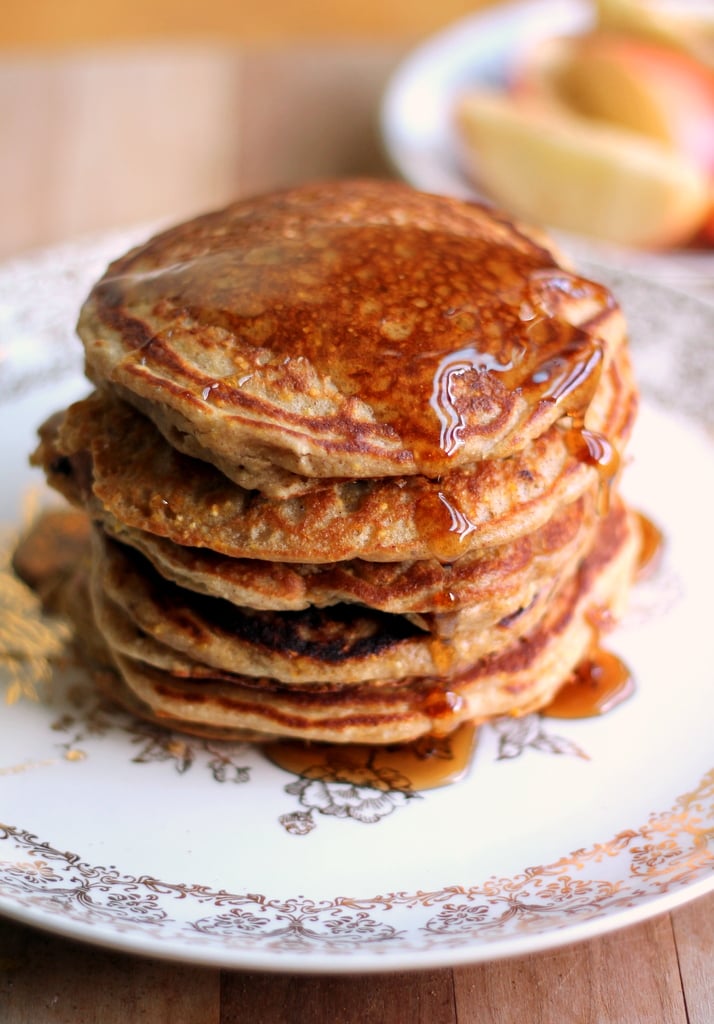 In the realm of comfort food, there is one thing that dominates breakfast: pancakes.

I remember when I was little and my Dad used to make me the thinnest pancakes — it was such a treat to wake up to! Later in life, I was a huge fan of thick and fluffy chocolate chip pancakes. To this day, every time I visit my best friend’s house from high school, I always request that her mom make her famous chocolate chip pancakes — they’re still my absolute favorite.

To be honest, I really love all pancakes because I only get to have them once in a while. And when I do, you better believe I load them up with creamy, warm peanut butter AND maple syrup. That combo CAN’T be beat… unless you’re throwing bacon into the mix. Then OMG, just stop it! 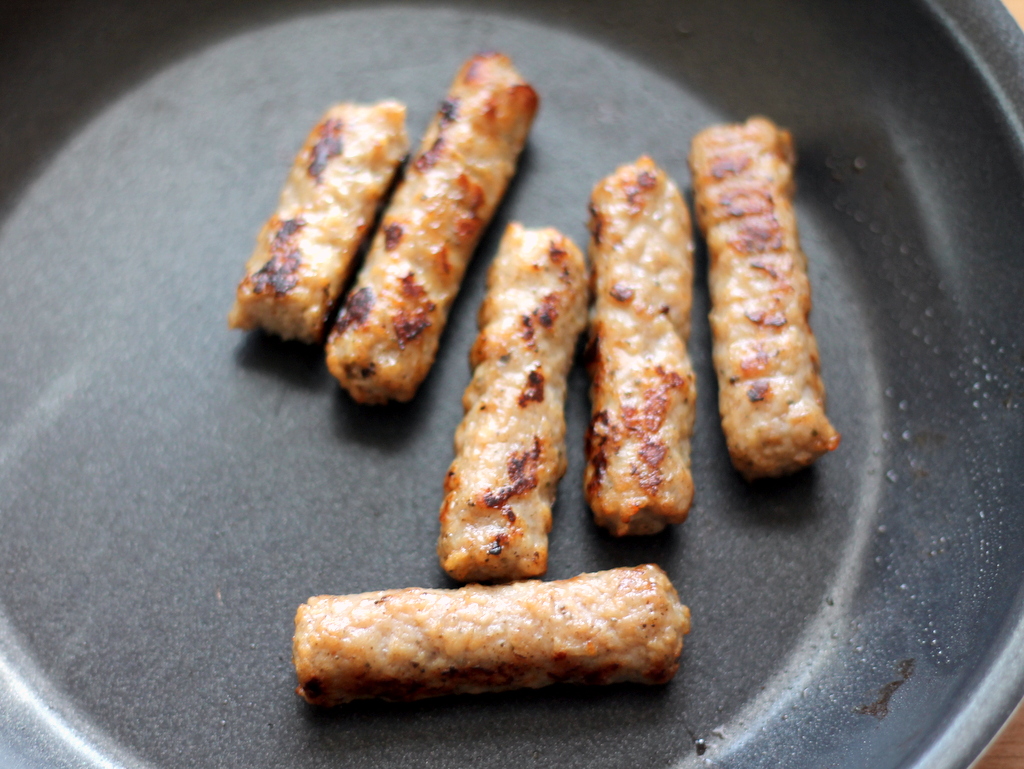 I was all set to make some apple cider donuts, but had a craving for pancakes and happily stumbled into this recipe.

Since it’s November and we’re in full Fall season, I decided to use Apple Cider in my pancakes for a sweet pancake with a bit of tang and spice. I didn’t use just any apple cider though, I used new SweeTango Apple Cider, made from SweeTango apples. It’s sweet and full of citrus notes with a touch of spice — basically unlike any apple cider out there. MAJOR!

Have you had a SweeTango apple before? I LOVE them. I find them a lot in Minnesota during the fall; they’re a cross between a Honeycrisp and Zestar, so you know they’re good!

Anyway back to pancake chat… 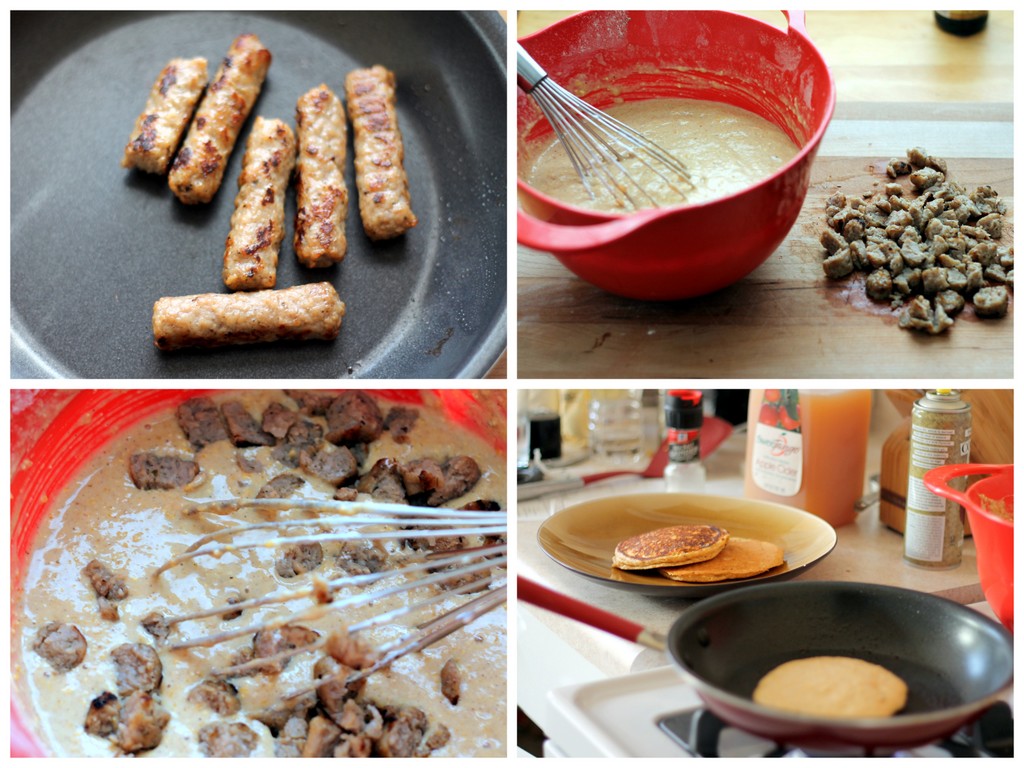 For some weird reason, I had a craving for breakfast sausage. Usually I stick to turkey bacon, but I was feeling like some chicken maple breakfast sausage and thought it would be fantastic in the pancakes. 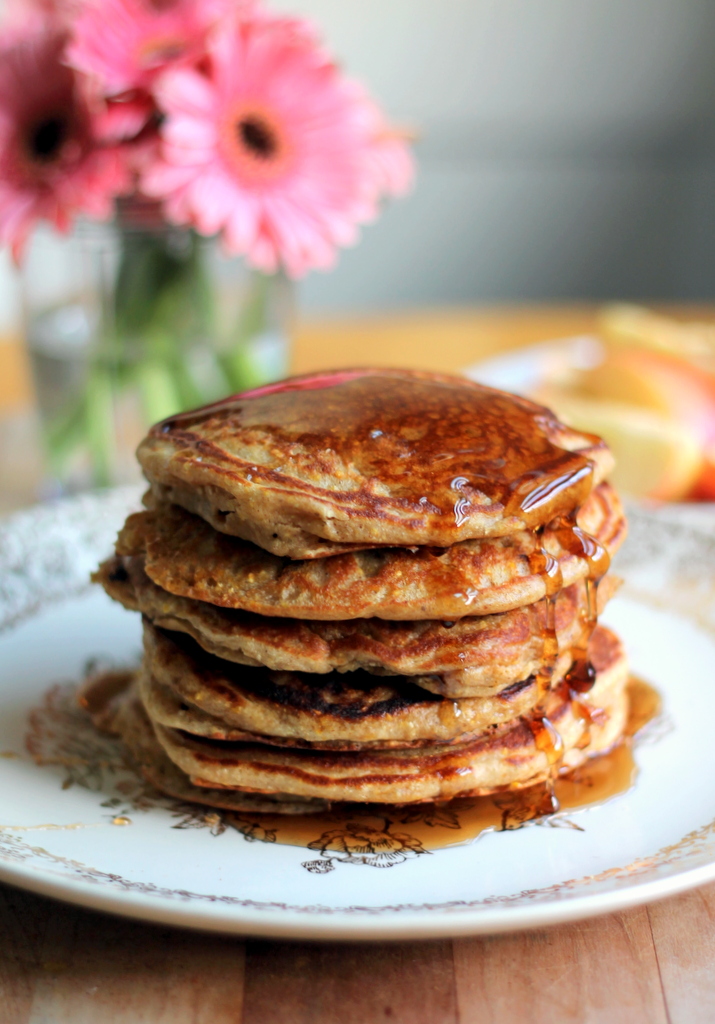 Even better when it’s a cornmeal pancake. 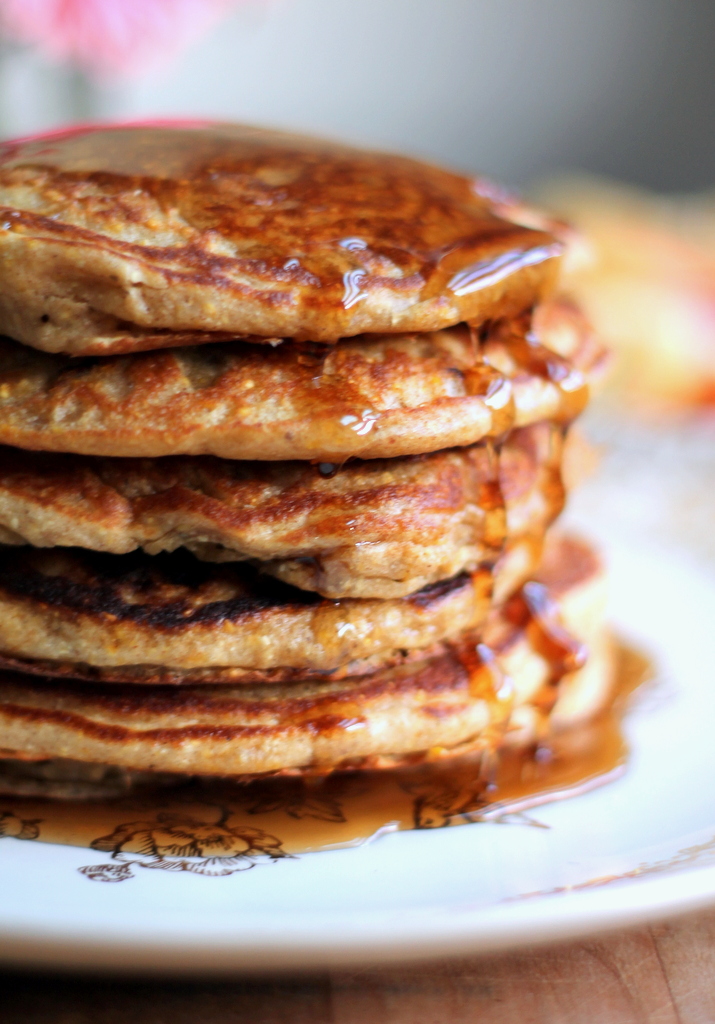 Of course they’re also made with whole wheat pastry flour as well as nonfat greek yogurt, a touch of maple syrup, cinnamon, nutmeg, and a bit of vanilla.

I also love how the greek yogurt adds additional protein and keeps them fluffy and moist! 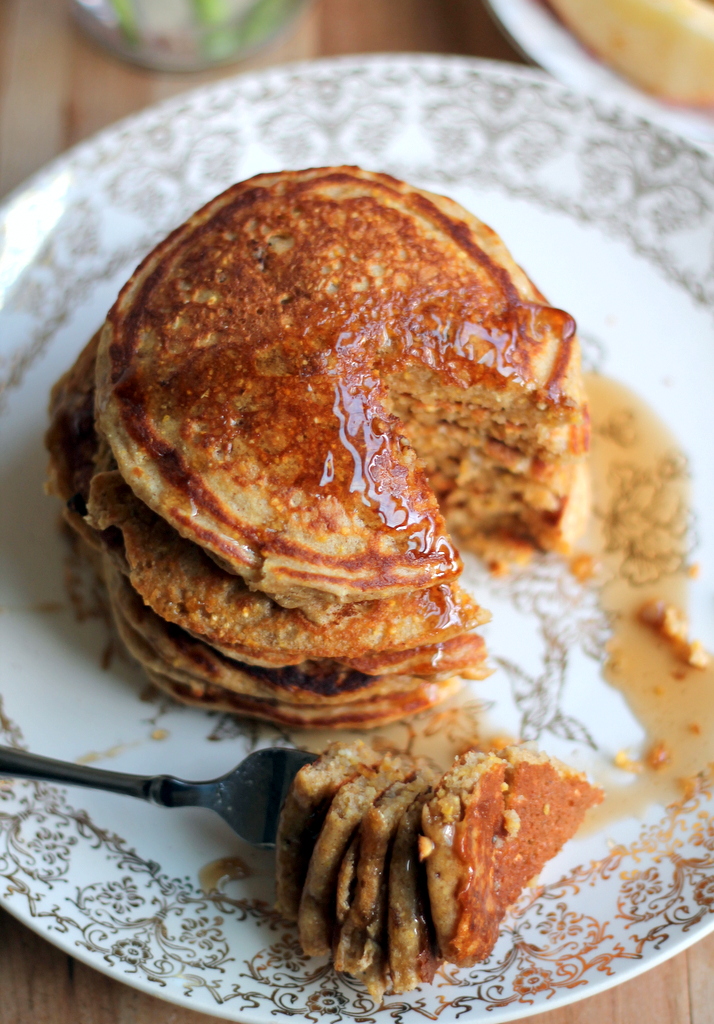 My favorite part of these pancakes are the sausage pieces; each bite offers a little salty-sweetness.

I hope you enjoy these and highly recommend looking out for SweeTango Apple Cider!

More info about SweeTango apple cider: In the eastern U.S., the cider is widely available in a variety of major grocery retailers. In the central part of the country, SweeTango cider is available in several retail chains in the Minneapolis-St. Paul area, at Dierbergs stores in St. Louis and at Central Market locations in Texas. (Hang in there, West Coast SweeTango fans, maybe next year!) 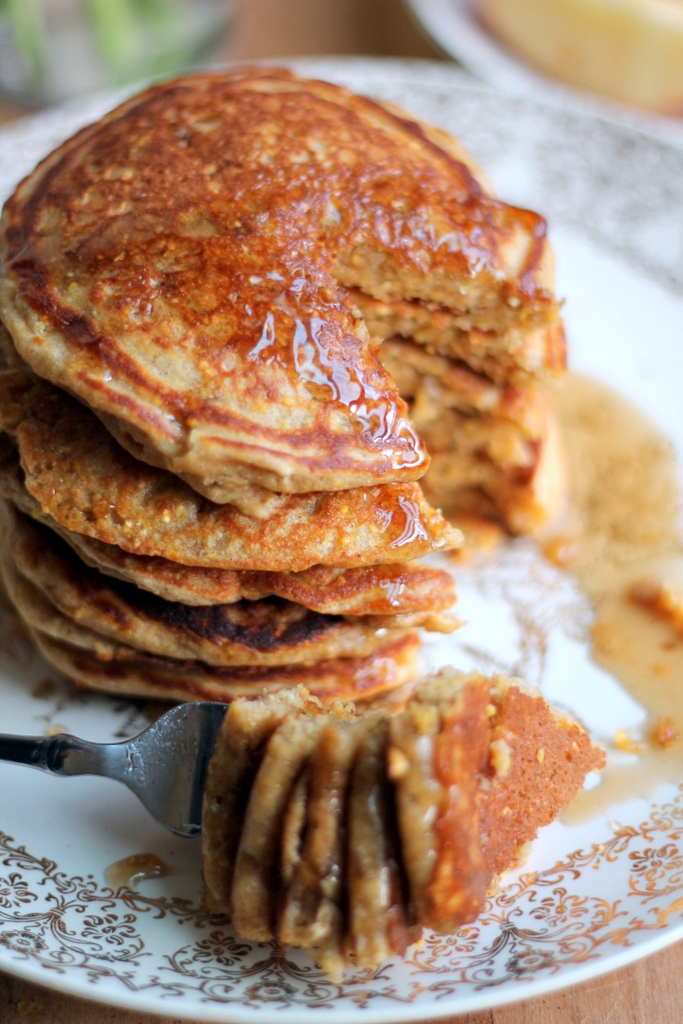 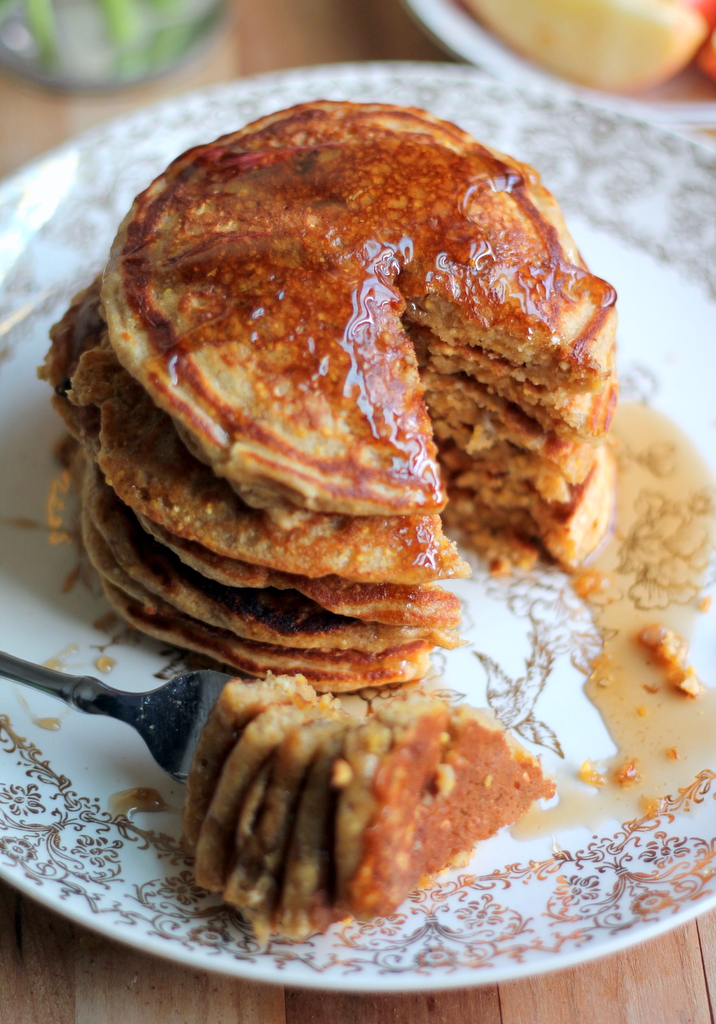 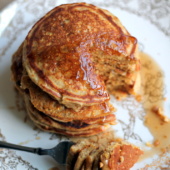 Apple Cider Cornmeal Pancakes made with a touch of maple syrup and sausage. You'll love these healthy, sweet & savory cornmeal pancakes for breakfast!

This post was sponsored by SweeTango; however all opinions are my own. Thanks for continuing to support Ambitious Kitchen! 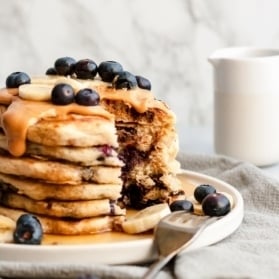 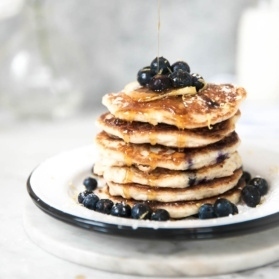 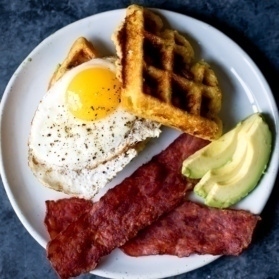 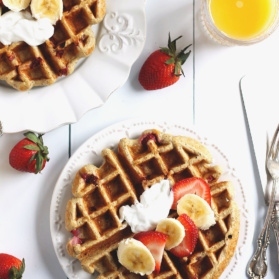